The way we interact with technology today is not too far from what was predicted by futuristic, sci-fi pop culture. We are living in a world where sophisticated touch and gesture based interactions are collaborating with state of the art wearables, sensors, Augmented Reality (AR), Virtual Reality (VR) and Mixed Reality (MR). And, this is eXtending user experiences to be extremely immersive.

Add to this, Gartner’s expectation that 5G and AR/VR implementation will transform not only customer engagement but brands’ entire product management cycles as well. Infact, according to IDC, spending on AR and VR is expected to reach $18.8 billion US dollars this year apart from enjoying more than a 75% compound annual growth rate through to 2023.

Even world famous tech conferences like CES 2020 are not immune to the allure of AR/VR products. Infact, CES recognized Human Capable’s AR Norm Glasses as the best of innovation at the event. We are also seeing a rise in several new players and devices like NReal,RealMax and North.

For over two decades, ThoughtWorks has been steering organizations through the dynamic world of tech innovation, right from AI to ML to the above mentioned AR and VR. The Seismic Shifts report is the company’s broad round up of upcoming tech trends and a ‘how-to’ playbook.

For the purpose of this article, I’d like to draw your attention to one particular shift, Evolving Interactions. ThoughtWorks’ report on the Seismic Shifts states,

“We must evolve our thinking—and our capabilities—beyond the keyboard and the screen. Mixed reality (MR) will become the norm.”

If nothing else, this is indicative of the radical evolution of people’s interaction with technology.

To get a better handle of what ‘beyond the keyboard and the screen’ means, let’s look at the different terms used when discussing reality tech - 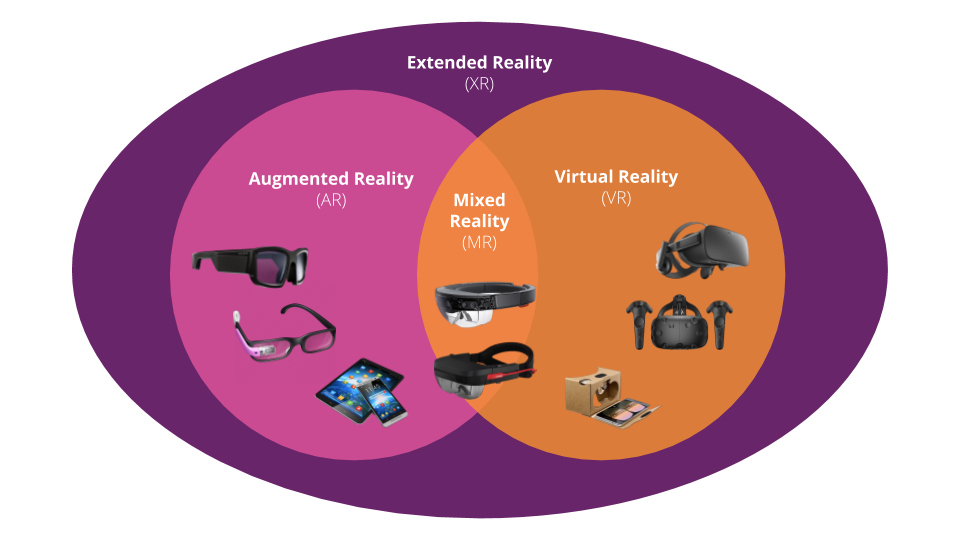 AR overlays digital content on to a real environment. Here is a list of the multiple tools that enhance AR implementation in the market today -

Smart glasses project digital content right in front of the user’s eye. The last 5 years have seen the progress of small glasses from bulky gadgets to lightweight glasses packed with more processing power, better battery life, a wider field of view and consistent connectivity. Google Glass, Vuzix, Epson, NReal are some of the popular devices in this segment.

AR capable smartphones and tablets that run AR applications are the most affordable link to augmented reality use cases. The eco-system that supports AR application development for Android and iOS devices is rich with several tools and techniques like ARCore, ARKit, Unity AR Foundation. Smartphone manufacturers are also powering their more recent phones with AR-compatible hardware. For example, here is the ever growing list of ARCore supported devices from Google.

VR is an immersive experience that shuts out the physical world and takes one into a virtual or computer-generated world.

“…changes the game, becoming one of the first consumer mass-market standalone VR headsets that requires no tethering or support outside a smartphone”. Furthermore, Oculus has recently come up with a hand-tracking solution on Oculus Quest which is a great market differentiator for the device.

Smartphone based VR is an economical choice to experience VR tech. Google Cardboard, and similar variants are quite popular in this segment. All one needs is a smartphone to fit into a virtual box. Media players and media content providers like YouTube have adapted and introduced the capability of consuming content in a 360-degree VR environment.

MR is a combination of both AR and VR, where the physical world and digital content interact. Users can interact with the content in 3D. Besides, MR devices recognize and remember environments for later, while also keeps track of the device’s specific location within an environment.

The familiarity with the foundational blocks allows us to move on to the bigger trend that businesses have an opportunity to explore - eXtended Reality. It’s an umbrella term for scenarios where AR, VR, and MR devices interact with peripheral devices such as ambient sensors, actuators, 3D printers and internet enabled smart-devices such as home appliances, industrial connected machines, connected vehicles and more.

The term XR is soon becoming common parlance thanks to the synergy of AR, VR and MR tech to create 3D content, and cutting edge development tools and practices. The industry is examining investment opportunities in XR platforms that allow shared services across devices, development platforms and enterprise systems like ERP, CRM, IAM etc.

“WebVR is an experimental JavaScript API that enables you to access VR devices through your browser. If you are looking to build VR experiences in your browser, then this is a great place to start.”

Additionally, Immersive Web from Google and WebXR from Mozilla are other prominent examples.

Development platforms like Unity 3D have gone ahead and crafted cross-device features. This is evident in how Unity AR Foundation supports both platforms - Android devices that use Google ARCore and iOS devices that use ARKit to build AR experiences.

An overview of the foundational blocks give us a small insight into the myriad possibilities of how we might interact with the world around us. In Part II of this series on eXtended reality, we will be deep diving into interesting use cases of the tech and explore realities that were only once possible in the movies.