The Operating System of XR (AR VR) devices is mostly customized to the hardware of the device, and not just that the OS level customizations are needed to meet the enterprise needs such as integration with Enterprise MDM (Mobile Device Management) solutions (such as Intune, MobileIron and Airwatch), 3D lock screen, idle-timeout, custom home screen, custom settings, security, as so on.

Most organizations currently using traditional hardware and software assets such as mobile devices, laptops, and desktops, and the processes and policies for managing these devices are quite stable and straightforward by now. Now the expectation is to follow the same/similar process for managing the organization’s XR devices. Most enterprise MDM supports standard OS (Windows, Mac, Linux, and Android), but mostly these are not well aligned to 3D user experience.

There are a number of XR devices based on Android, eg Oculus,Google Glass, Vuzix, and ARCore/VR supported Smart Phones. This article is a first step toward building a custom Android OS and small customizations. We will use the Android Open Source Project (AOSP) to build the custom image as per our needs. 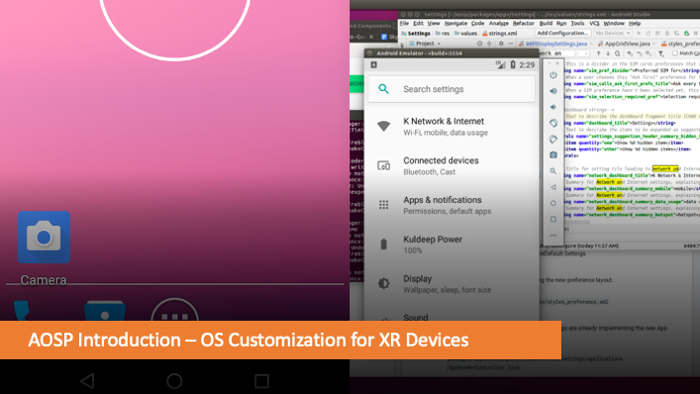 Take a deep breath, this will be a lengthy task, you need to wait for hours and hours to finish the steps, and plan your time ahead.

Wait, before you start. It needs 230GB plus free disk space, and a decent Linux based environment. I was able to get a spare Mac Book Pro with 230 GB available space, I thought of setting the environment following the guide building-android-o-with-a-mac.

But later, I found that after basic build software installations and IDE setup, space available is less than 220 GB. Luckily I was in touch with an Android expert Ashish Pathak, he suggested not to take a risk and find other PC.

Let’s first set up a Linux environment from scratch. Remember Virtual Box etc are not the option here, let’s not complicate things.

Setup a Linux based Development Environment

Follow the steps below to set up a Linux environment from scratch on a Windows PC.

Follow the below steps to set up a build environment for AOSP. Detailed steps are here

Parallel to this, I have also started downloading Android Studio, with SDK, emulators or so. — Follow the steps

Let’s do another big chunk, building the source code

Oops! the settings app is failing to load.

Logcat tied to look through the logs using logcat.

This issue may be related to the branch Android 8.1 that I checked out, I tried to rebuild “m clean” and “m” but no luck.

Luckily I am not the only one facing this, I found this.

Now I got two suggestions, change WifiDisplaySettings.java in the AOSP packages or just clean build with the user-debug target. I will go with the first option.

Locate the settings in /packages/apps/Settings and open in Android Studio.

Let’s build again, another few hours? No, don’t worry this time it won’t take long, it will build just what you have changed. Run the make command again.

The emulator is now built with changes, run the emulator now. And here you go, Settings app is working!

Hay! you know, you have already customized the android image. Not excited enough, let’s do one more exercise to customize the Settings Menu options.

Build the image (remember the m command) and run the emulator as described in the last step, wait for a few minutes and you have your customized android menu.

With this, your custom settings app is ready and available in the Andorid Image, and now I would like to close the article, and say you good Night.

I will write about flashing this image to a device later, the spare phone for which I am building this image, is now not working, looks like my son has experimented with that old phone.

In the future, we will also discuss how to customize native users managements in android based XR devices, and also how to handle device-specific options that are not supported in the regular phone.

This article is original published on XR Practices Publication