Change is the only constant, it requires continuous effort from humankind to understand the change that leads to success, and make us even more successful. In my earlier article, I talked about the success mantra, and also wrote about accepting the change when required. Sometimes the way we perceive our success becomes a blocker for becoming more successful. We accumulate some habits knowingly or unknowingly along the path of being successful, and mostly we never realize that those habits start blocking our way forward.

Today, in the time of the Covid19 pandemic, even nature wants us to change the way work, the way we eat, the way we use natural resources, and other words the way we live. We will get over this pandemic, with a lot of learning and change. We need to change for humankind, and ourselves, after all, what got you here, won’t get you there.

I penned down an article for the successful people and want to become more successful. Know the changes that are required to reach there. We might have achieved many goals and crossed milestones, but with all this, we may not reach there, as it requires constant monitoring and change in us. 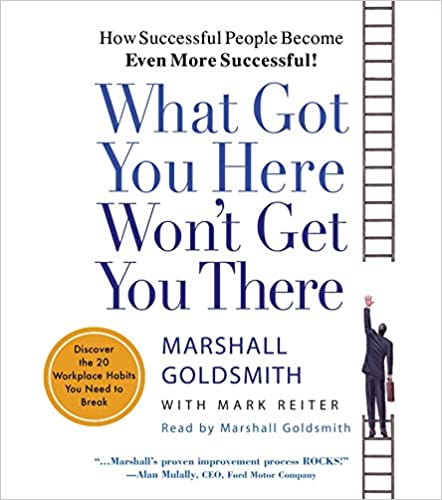 Marshal is one of the world’s preeminent executive coaches, and this book is his experience of coaching successful people to become more successful. I recommend this book to everyone who thinks that they are successful, and they don’t need or need advice for being more successful. This book covers 20 habits that hold you back from the top, honestly, you may link many of them with your habits.

My takeaway from the book here -

The book starts nicely, directly hitting the critical point in the very first chapters with nice examples. Being a successful person, we are in the delusion of success,

Successful people with strong success myths described in the last section generally accumulates some of the following habits that hold them here, and don’t let them there. The higher we go, the more we prone to behavioral issues.

Some of them holdback habits are -

We the successful people, accumulate some habits where we value too much of being “me”. With this, wining becomes necessary for us in all situations even if it is not important,

With such a state of mind, it is hard to value other’s ideas, and consequences might be that other people stop giving their opinion, which boosts this habit. We gain the habit expressing our opinion, no matter how hard hurtful or non-useful it is, just to realize our rights of “Too much me”. It blocks our way

We can’t be masters of everything, but with a habit of putting “too much me” keep telling the world how smart are we, and this can some times lead to embarrassment when we arguing with other people with that expertise, we also tend to not value other’s expertise.

With this holdback habit, we tend to defend what we say and oppose each and everything that others say. We tend to use words like “if”, “No”, “But” and “However” a lot in our conversation.

When someone comes with an idea, our first reaction is “Let me tell you why it won’t work”. No matter what the idea is, our mind, first starts finding negatives from the idea.

We are so biased of the success that we feel we can make fun of anyone, pass judgment, or make even some descriptive comments, and they would ignore them in respect to our success. It is not true. The damage by our word is irreversible, it doesn’t matter how hard we apologize later.

Some have a bias for some people, and they play favoritism.

Failed to recognize others or eat up their credit

Even some successful people have this habit of not recognizing others well and encourage them for their work. Even worse, some leader eats up the credit of others, and use their idea as their own idea.

The only way to know about your habits that hold you back is feedback. ThoughtWorks has a great culture of feedback, everyone gives feedback frequently, and it is advised to get feedback from all the diverse roles, and across teams.

The ‘self’ we think, and the ‘self’ rest of the world sees in us is mostly different. The only way to fill the gap is by getting right feedback.

Some organizations also have 360-degree feedback and encourage people for one-on-one feedback with peers. We should know the art of taking feedback, and share a vision and agenda for asking the feedback. Consume the feedback peacefully. This is just one way of feedback, there are other ways to get feedback from others.

The right time to start the change is now, identify the right thing you want to change and start it now. Make a plan, and tell the world that you are improving, yes, in fact, publicize to the world, that you are changing, and ask for a favor. Remember, and convey the message, that you can’t change the past but from today are trying to improve. Leave the past behind and move forward.

Generally, change begins with apologizing, the author calls it a magic move. Please mean it when you apologize to someone.

You have two ears and one mouth…
use them in that proposition…
and in that order!

If your statement not adding any value then don’t just say anything other than ‘thank you’. and yet this is the next key thing you do. Starting thanking people in your life, have gratitude towards them.

if you get rid of this holdback habit then ……………

The change becomes easy when we can measure it, if we can measure it then we can achieve it. and the best technique to measure is follow up. Once we declare that we are changing, just set up the follow ups with your peers, and people who signed up to favor us in our journey of change. Ask them about how much have we changed, what next they expect etc.

You are here, define your there and let the journey begins

Let the change continue till the last bread, and keep improving every day for humankind and self, and be better you.

It is originally published at Medium